Many parents have wasted both time and money pursuing treatments that promised a cure for their children. But presently there is no cure for sickle-cell anemia; it is a lifelong disorder. There are, however, simple things that can be done to minimize the frequency of crises, and there are ways to deal with them when they happen In our previous article, we discussed on a lighter note if its safe for couples with AS Genotype to marry.

In this article, we will highlight the consequences of making some unhealthy choice about AS Genotype compatibility so that anyone who is currently carried away with the “Love is Blind”  symptoms can look beyond the initial romance into the real future bearing fruits of a faulty choice .

THERE were 32 people in the conference room, mostly women and children. Six-year-old Tope, frail, dressed in pink, sat quietly beside her mother, on a wooden chair. She listened as the nurse spoke to them about what to do when the pain comes.

Tope knew about pain—pain that comes terribly and suddenly and lasts for days before it subsides. Perhaps it was the pain that made her serious beyond her years.

“She is my first-born,” said her mother. “From the beginning she was always sick. I went to many churches, and they prayed over her. But she still got sick. Finally, I took her to the hospital. They tested her blood and found she was a ‘sickler.’”

What Is Sickle- Cell Anaemia?


At the Center for Sickle-Cell Anemia in Benin City, Nigeria, Tope’s mother learned that sickle-cell anemia is a disorder of the blood. Contrary to superstitious beliefs, it has nothing to do with witchcraft or spirits of the dead. Children inherit sickle-cell anemia from both parents. It is not contagious. 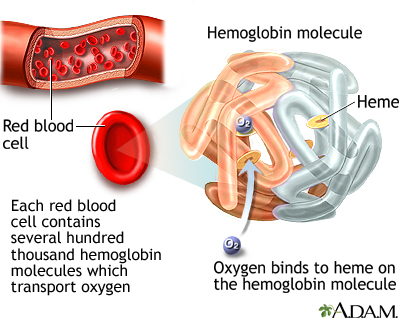 There is no way you can catch the disorder from another person. Either you are born with it or you are not. Tope’s mother also learned that while there is no cure, the symptoms can be treated.

Sickle-cell anemia occurs mostly in those of African descent. Dr. I. U. Omoike, director of the Center for Sickle-Cell Anemia, told Awake!: “Nigeria has the largest black population of any nation and therefore has the largest number of sicklers of any nation. That makes this country the sickle-cell capital of the world.”

According to the Daily Times of Lagos, about one million Nigerians have sickle-cell anemia, and 60,000 die of it each year.

A Problem in the Blood


To understand the disorder, we need to know what blood does and how it moves through the body. An illustration helps. Imagine a country that depends on imported food to feed people living in rural villages. Trucks drive to the capital city where they are loaded with food. They leave the city along major highways, but as they enter the rural areas, the roads narrow.

If everything goes well, the trucks reach their destination, drop off their food, and then return to the city to collect more food for the next delivery. If many of the trucks break down, however, the food spoils and other trucks are blocked from passing. Then the people in the villages have little to eat.

In like manner, the red cells in the blood travel to the lungs where they pick up a supply of oxygen—food for the body. They then leave the lungs and travel swiftly through major arteries to all parts of the body.

Eventually, the “roads” become so small that the red cells can move only in single file through tiny blood vessels. It is there that they deposit their load of oxygen, which feeds the cells of the body.

A normal red blood cell is round like a coin and moves through the smallest blood vessels quite easily. But in people who have sickle-cell anemia, the blood cells break down. They lose their round shape and take the form of a banana or a sickle—a farmer’s implement.

These sickled blood cells get stuck in the small veins of the body, like a truck in the mud, blocking other red blood cells from passing. When the flow of blood to a part of the body is reduced, the oxygen supply is cut off and the result is a painful crisis.

A typical sickle-cell crisis results in excruciating pain in bones and joints. Crises are unpredictable; they can occur rarely or as often as every month. When they do occur, they are distressing to both child and parent.

Ihunde is a nurse who works at the sickle-cell center. “It is not easy to manage a sickler child,” she says. “I know, because my daughter has the disorder. The pain comes suddenly. She screams and cries, and I cry. Only after two or three days, maybe after a week, will the pain subside.”

Symptoms
Symptoms often appear after the child reaches the age of six months. One of the first signs is painful swelling of the hands or the feet or both. The child may cry frequently and not eat much. The whites of the eyes may appear yellow. The tongue, lips, and palms may be paler than normal. Children showing these symptoms should be taken to a hospital, where a blood test can show if the problem is sickle-cell anemia. 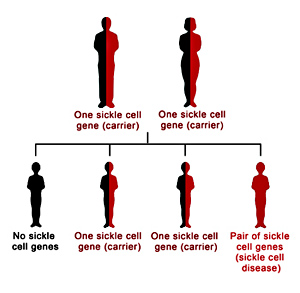 When sickled cells clog blood vessels, pain most commonly affects the joints. A severe crisis can also disrupt the work of the brain, the lungs, the heart, the kidneys, and the spleen—sometimes with fatal consequences. Leg ulcers in the ankle region may persist for years. Children risk seizures or strokes. Those with sickle-cell anemia are especially prone to infectious diseases, since the disorder weakens natural defenses. Infection is a common cause of death.

Of course, not everyone with sickle-cell anemia develops all these symptoms. And some do not experience problems until they reach their late teens.

Treatment
Many parents have wasted both time and money pursuing treatments that promised a cure for their children. But presently there is no cure for sickle-cell anemia; it is a lifelong disorder. There are, however, simple things that can be done to minimize the frequency of crises, and there are ways to deal with them when they happen.

When a crisis occurs, parents should give their child plenty of water to drink. They can also give a mild pain-relieving drug. Severe pain may require stronger drugs that can be obtained only from a doctor. Sadly, though, sometimes even powerful drugs bring little relief. There is no need to panic, however. In almost all cases, after a few hours or days, the pain subsides and the patient recovers.

Scientists are searching for drugs to help treat the disorder. Early in 1995, for example, the National Heart, Lung, and Blood Institute in the United States announced that the drug hydroxyurea reduced by half the frequency of painful crises in sickle-cell patients. It is thought to do this by preventing red blood cells from changing their shape and clogging the blood vessels.

Such drugs are not readily available everywhere, nor are they helpful in every situation. And despite the well-known dangers, doctors in Africa and elsewhere regularly administer blood transfusions to treat sickle-cell patients in emergency situations.

Prevention of Crises
“We tell patients to drink plenty of water to help prevent crises,” says Alumona, a genetic counselor at the sickle-cell center. “Water makes it easier for blood to flow in the vessels of the body. Adults with sickle-cell anemia should drink three to four quarts of water every day. Children, of course, will drink less.

Since illness can cause a dangerous crisis, those with sickle-cell anemia need to work hard to maintain good health. They can do this by maintaining personal cleanliness, by avoiding prolonged strenuous activity, and by eating a balanced diet of good food. Doctors also recommend that the diet be reinforced by multivitamins and folic acid.

Informed Decisions Before Marriage
People of African descent are wise to find out what their blood genotype is long before they consider marriage. This can be done by a blood test. People who have AA blood can be assured that none of their children will develop sickle-cell anemia, no matter whom they marry. Those who have AS blood should understand that if they marry a person who also has AS blood, they run a high risk of producing a child that will have sickle-cell anemia.

While many doctors strongly discourage AS from marrying AS, the counselors at the sickle-cell center let people make their own decision. Dr. Omoike says: “Our job is not to frighten people or to tell them who they should or should not marry. No one can predict for sure that children born to an AS couple will have SS blood, since that is a matter of chance.

Even if they do have an SS child, that child may tolerate the disorder without too many problems. But we do want people to know what their genotype is. And we try in advance to help people to be aware of what could happen so that if they do have SS children, it will be no surprise. That way, they are in a position not only to make decisions based on knowledge of the facts but to prepare themselves mentally to accept the consequences of those decisions.” 1 thought on “Sickle-Cell Anemia— Knowledge is your best defence!”