Coping with the loss of a loved one

Perhaps someone you love—a parent, a brother, a sister, or a friend—has died. And rather than feel only sorrow, you also feel anger, confusion, and fear. Try as you may, you can’t hold back tears. Or you keep the pain you feel bottled up inside.

Really, it is only natural to react emotionally when someone we love dies. Even Jesus Christ, when he learned of the death of a close friend, “gave way to tears” and “groaned” inside. (John 11:33-36; compare 2 Samuel 13:28-39.) Realizing that others have felt as you do may help you better to deal with your loss.

At first you may feel numb. Perhaps deep inside you hope that it’s all just a bad dream, that someone will come and wake you up and things will be just as they’ve always been. Cindy’s mother, for example, died of cancer. Explains Cindy: “I’ve not really accepted that she’s gone. Something will happen that I might have discussed with her in the past, and I find myself saying, ‘I’ll have to tell Mom that.’”

Bereaved persons tend to deny that the death has occurred. They may even think they suddenly see the deceased one on the street, in a passing bus, on the subway. Any fleeting resemblance can spark the hope that perhaps it has all been a mistake. Remember, God made man to live, not to die. (Genesis 1:28; 2:9) So it’s only normal that we have trouble accepting death.

“How Could She Do That to Me?”

Don’t be surprised if there are even moments when you feel a little angry with the person who died. Cindy recalls: “When Mom died, there were times when I thought, ‘You really didn’t let us know you were going to die. You just skipped out.’ I felt deserted.”

The death of a brother or a sister can likewise stir such feelings. “It’s almost ridiculous to feel anger at someone who’s died,” explains Karen, “but when my sister died, I couldn’t help it.

Thoughts like, ‘How could she die and leave me all alone? How could she do that to me?’ kept going through my head.” Some find themselves angry at the sibling for all the pain that his or her death has caused. Some feel neglected, perhaps even resentful, because of all the time and attention that the sick brother or sister received before dying. Grief-stricken parents who, out of fear of losing another child, suddenly become overly protective can also stir animosity toward the deceased.

Guilt is also a frequent reaction. Questions and doubts pour through the mind. ‘Is there anything more we could have done? Should we have consulted another doctor?’ And then there are the if onlys. ‘If only we had not quarreled so much.’ ‘If only I had been kinder.’ ‘If only I had gone to the store, instead.’Mitchell says: “I wish I had been more patient and understanding with my father. Or done more things around the house to make it easier for him when he came home.” And Elisa observed: “When Mom got sick and died so suddenly, there were all of these unresolved feelings we’d had for each other. I feel so guilty now. I think of all the things I should have said to her, all the things I shouldn’t have said, all the things I did wrong.”

“What Do I Tell My Friends?”

One widow observed regarding her son: “Jonny hated to tell other children that his father was dead. It embarrassed him and it also made him angry, just because he was embarrassed.”

The book Death and Grief in the Family explains: “‘What do I tell my friends?’ is a question of supreme importance to many siblings [surviving brothers or sisters]. Frequently, siblings feel that their friends do not understand what they are experiencing. Attempts to share the import of the loss may be met with blank stares and quizzical looks. . . . Consequently, the bereaved sibling may feel rejected, isolated, and, at times, even freakish.”

Realize, though, that others sometimes simply do not know what to say to a grieving friend—and so they say nothing. Your loss may also remind them that they, too, can lose a loved one. Not wanting to be reminded of that, they may shy away from you.

Facing Up to Your Grief

Knowing that your grief is normal is a big help in coming to grips with it. But it only prolongs grief to continue to deny reality. Sometimes a family will leave a vacant place at the meal table for the deceased, as if that one were about to come in for a meal. One family, though, chose to handle matters differently. Says the mother: “We never sat at the kitchen table in the same order anymore. My husband moved into David’s chair, and that helped to fill that void.”

It also helps to realize that while there may well be things you should or shouldn’t have said or done, usually those are not the reasons your loved one died. Besides, “We all stumble many times.”—James 3:2.
Sharing Your Feelings

Dr. Earl Grollman suggests: “It is not enough to recognize your conflicting emotions; you must deal with them openly. . . . This is a time to share your feelings.” It is not a time to isolate yourself.—Proverbs 18:1.

Dr. Grollman says that in denying grief, “you only prolong the agony and delay the grief process.” He suggests: “Find a good listener, a friend who will understand that your many feelings are normal reactions to your bitter grief.” A parent, a brother, a sister, a friend, or an elder in the Christian congregation can often prove to be a real support.
And what if you feel like weeping? Dr. Grollman adds: “For some, tears are the best therapy for emotional strain, for men as well as for women and children. Weeping is a natural way to ease anguish and release pain.”

Pulling Together as a Family 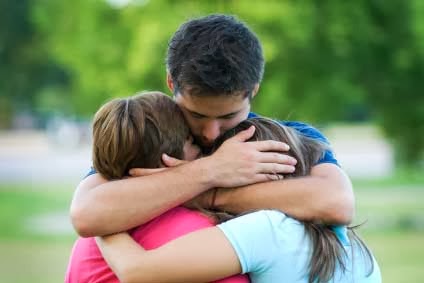 Your parents can also be a great help in time of loss—and you can be a help to them. For example, Jane and Sarah, from England, lost their 23-year-old brother Darrall. How did they survive their grief? Jane answers: “Because there were four of us, I went and did everything with Dad, whilst Sarah did everything with Mum. In this way we were not on our own.” Jane further recalls: “I had never seen Dad cry before. He cried a couple of times, and in a way, it was nice, and looking back, I feel good now that I could be there just to comfort him.”

A Hope That Sustains

Young David, from England, lost his 13-year-old sister Janet to Hodgkin’s disease. He says: “One of the things that benefited me greatly was one text quoted in the funeral talk. It states: ‘Because God has set a day in which he purposes to judge the inhabited earth in righteousness, and he has furnished a guarantee to all men in that he has resurrected him, Jesus, from the dead.’ The speaker stressed the expression ‘guarantee’ concerning the resurrection. That was a great source of strength to me after the funeral.”—Acts 17:31; see also Mark 5:35-42; 12:26, 27; John 5:28, 29; 1 Corinthians 15:3-8.

The Bible’s hope of the resurrection does not eliminate grief. You will never forget your loved one. However, many have found real comfort in the Bible’s promises and, as a result, have begun to recover gradually from the pain of losing someone they loved.

For more comforting information, Please Download an MP3 that shares practical lesson on how to cope When someone you love dies. 2 thoughts on “Coping with the loss of a loved one”